Solidarity, Resilience and cooperation in a time of a pandemic: co-designing a brighter future

HomeBlogSolidarity, Resilience and cooperation in a time of a pandemic: co-designing a brighter future

The outbreak of COVID-19 has had a global effect. It has forced almost all of us, no matter where or who, to cut off nearly all face-to-face social contact for the sake of preventing further spread of the novel Coronavirus. Since the middle of March, many activities and gestures, that only a few weeks ago appeared to us to be essential, have been abruptly interrupted — though thankfully many restrictions are now being lifted in European countries. Th restriction of the most common and widespread interactions, such as playful and cultural activities, but also and above all working relationships, caused an initial shock. Abruptly forced from physical to virtual meeting spaces, that digital alienation that was previously tolerated, but seen as something akin to a pathology, has now become emblematic of responsible behavior. For many people it also represents a now rare chance to stay in touch with others outside of our immediate households.

Paradoxically, this radicalization of individualism has also generated its clear rejection. This refusal is visible in various forms. It manifests itself in closer ways of sharing and communicating with the communities of which we feel part. Often it has taken the form of activities that are characterized by a strong degree of creativity, like dinners on Skype, songs from balconies, collective applause and plaudits of essential workers who are denied the safety of relative isolation. Anecdotally, a common remark has been that one bright stop in the darkness of this crises has been reconnecting with old friends and family through new digital tools. But these rearrangements also bear witness to our persistence in continuing with our daily activities notwithstanding the challenges.

This visceral response also highlights another aspect that dignifies it and gives us a clear indication for a possibly different future. The considerable attention that has emerged around productive activities of various kinds, often poorly valued in the complex social fabric, testify to a renewed awareness of the fundamental role that the dignity of an individual function assumes in light of its role for the community. A whole series of occupations, usually considered less noble, have emerged in their importance for the development of our daily lives — shelf stocker, rubbish collector, delivery rider, not to mention cleaners, nurses and carers. Accordingly, we are rediscovering the importance that each of us with our own work, our skills, carries out, albeit indirectly, for the work of others. That is why the appeals to personal responsibility are so vehemently accompanied by a call to solidarity with those who cannot make it alone. This sense of solidarity stemming from the interdependence of complex modern societies is called, by the famous French sociologist Emile Durkheim, “organic solidarity”. He contrasts it with the “mechanical” solidarity that characterizes pre-modern bonds of kin and clan.

Amongst the principles of democratic societies, the importance of this form of mutual solidarity is often overlooked. Like Karstic waters, solidarity resembles a river flowing underground, shaping our territories, and surging upwards only in certain moments, when a strong pressure unveils its necessity.

Solidarity — the willingness to bear costs or risks for others in the name of broader social, political or civic goals — has a balancing and repairing role, which is crucial to maintaining the appropriate efficiency and fairness within our democratic societies. Solidarity can operate at different levels and in different ways. Our governments surely play a major role, especially in institutionalizing solidarity relations through involuntary risk sharing schemes like public health care systems, but it is also our responsibility to integrate those general measures with our own tailor-made contribution. Solidarity requires an active stance, moving away from passively hoping that ‘they’ will do something, to doing it ourselves, together.

What this emergency has allowed us to rediscover is that we are not only citizens of a global world, but we are also and especially members of different communities where our roles are significant and in which our lives take on meaning. Therefore, it is in our communities that we are now called to operate in order to reinforce mutual support.

The challenges that we are all experiencing as parts of the Covid-19 crisis can represent a starting point to build new ideas and practices that will help us in resisting to the severe effects of the upcoming crisis by remodeling our work and open the way to a bright future. It is time to build initiatives to co-design a new normalcy and develop a virtuous and solidaristic circle over time. In order to do so we must deploy one of our best qualities, resilience. We should strengthen our collaborations by sharing ideas, insights and experiences. How to configure digital work spaces such that they retain their humanity, how to use data science to increase the efficiency of processes and potentially the efficacy of vital economic interventions in the aftermath of the COVID19 crisis, or the introduction of virtual reality as a tool for envisaging our future selves, all represent fruitful paths being explored within the context of BISS.

The interdisciplinarity of our approach at BISS favours the creation of alternative strategies to tackle new challenges and to contribute to better societies. Digitalisation, gamification, virtual reality, ethics and regulatory frameworks, are only some of the angles from which we address this shared goal of the institute. A moment of great difficulty and confusion can also represent a great opportunity to unleash creativity and strengthens our bonds. The launch of the BISS Blog will hopefully be a way to stimulate and share our efforts with our more immediate UM and Brightlands communities, but also beyond. The blog aims at becoming a hub for sharing ideas, expertise and challenges, but especially paths to be explored together. In this way we hope that it reinforces the bonds that make us more than an aggregate of individuals, but a community.

The first contributions are excellent examples of how specific expertise at BISS can be put at the service of common challenges and create spaces of collaboration. 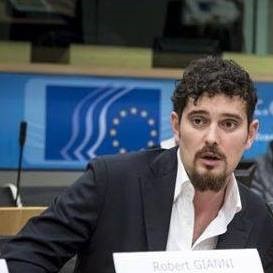 Robert is a researcher at BISS. His aim is ensure that the different phases of technology development are ethically and democratically sound. In addition, he wants to enhance democratic practices within scientific research and innovation. Key research questions are ‘How can we implement a legitimate and efficient process of co-construction when designing new technologies?’ and ‘How can ethics and responsibility play a positive role enabling a meaningful interconnection between different spheres of society?’, but also ‘How can we radicalize democracy through its extension in domains that are not limited to the one of political democracy?’.

He works with stakeholders, end-users and other scientists to understand the different roles of technology on democratic practices and how they can be mutually beneficial.