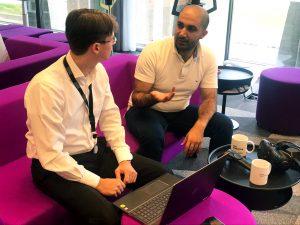 During his childhood Ous wanted to become a computer scientist. Working in an environment where creativity, technology and future are made. While studying at Damascus University – School of Law, he got the idea of combining law and computer science. It seemed a crazy idea in which very few lawyers were interested. Now, being employed at Maastricht University and active at BISS at the Brightlands Smart Services Campus, he can elaborate on this. Let’s turn crazy into smart.

Ous is teaming up with Gijs van Dijck, principal investigator at BISS and Professor of Private Law at Maastricht University. “We focus on a smart and efficient interaction between society and law using the tools of data science. For example, we are working on ‘automated legislation management’ where data science, algorithms and AI will be used to improve law practices. In other words, a lawyer’s time allocation to small services can be reduced considerably by applying data science, so that clients will start paying less for less important services and lawyers can spend more time on more complex and important cases.

Ous is happy to be at BISS. He’s a fit, he feels. “BISS combines the academic and practical environments. Its team focuses on data-driven smart services, a true benefit for the growing digital society we live in”.

Finally, back in Syria in 2008, Ous passed his bachelor and started a master he never finished: war made him flee to Turkey and eventually to the Netherlands. In May 2018, Ous got interviewed by ‘Het Financieele Dagblad’. Read the personal interview entitled Pas gevlucht, nu al een goede baan.